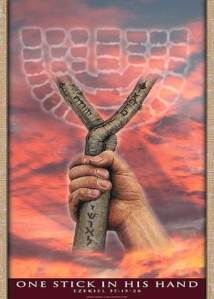 In Ephesians 2, the Apostle Paul explains how Gentiles who have believed in faith on Yeshua HaMashiach (Jesus Christ) are, by the grace of God, connected with Jews in the Commonwealth of Israel.  Paul expounds further on this theme in Romans 9-11, culminating in his discourse on how non-Jews have been grafted into Israel by the work of Messiah.  One could make the case that this “Commonwealth of Israel” and “grafting in” are the beginning of the fulfillment of Ezekiel’s vision of the Two Sticks, when God reunites the Two Houses of Israel, Judah and Ephraim, into one people with Messiah, the Son of David, as their King.

Whatever one’s position on the Two Houses question, there should be no confusion on the fact that believers in Yeshua, regardless of their ethnicity and nation of origin, are joined with Israel and therefore have a special relationship both with the Jewish people.  The Messianic and Hebrew Roots movements are manifestations of that understanding.  Major breakthroughs are occurring as more people come to realize two things.  First, that a Jew does not cease to be Jewish when he or she acknowledges that Yeshua of Nazareth is Messiah; and second, that a Christian of Gentile background does not become Jewish simply because he or she desires to follow Yeshua’s example in learning and obeying Torah.

The Barking Fox seeks to promote Jewish-Christian dialogue and cooperation in the hope that our common belief in the Word of God and the God of the Word is greater than the things that have divided us over the centuries.  We have much to overcome, for the things that have divided us are monumental, but they will continue to divide us if we make no effort to communicate and understand one another.

A Jewish Question for All of God’s People: “We were given the Torah, but have we received it?”

A Letter to the Jewish People (on teshuvah) by Ken Rank

A Place at the Table

About That Second Stick:  Positive Harbingers

After the Fox:  A Long-Expected Transition

After the Fox:  Still in Transition

An Explanation to a Jewish Brother

An Invitation to Pray for Israel During the Days of Awe

Awakened:  The Spiritual Destiny of the First Americans

By Root and Branch: A Personal Messianic Challenge

Can These Dry Bones Live? A Report from the B’ney Yosef Congress of North America

Commonwealth and Cooperation:  How Jews and Christians Can Work Together

Community and the Regathering of Ephraim

Does Israel Have a Distinct Place in the Age to Come? – Dan Juster

Dying in the Wilderness

Enjoying Shabbat in the Desert!

Examples for us; upon whom the end of the age has come – losttribesfoundblog

For the times they are a changin’ – UNITED 2 RESTORE

Give Me A Place Where I May Dwell

If Not the Blood of Yeshua, What Brought Ruth “Near” to the G-d of Israel?

In Search of Kingdom Unity

Is Jesus on Vacation?

Israel 2016:  A Lesson in Being Peculiar

Israel 2016:  A Quantum Leap Toward the One New Man

Israel 2016:  Between the Surreal and a Holy Place

Israel 2016:  Picking Up Where We Left Off – A Report on the Second B’ney Yosef National Congress

Our Baby is Alive and Well!  A Report on the Growth of B’ney Yosef North America

Remembering ALL Our Roots

Shooting Ourselves in the Foot. . .

That Jew Died For You

The Barking Fox Wrote A Book!

The Cure For Disunity In The House Of Israel – Kimberly Rogers

The Dilemma of the Ger: Commentary on “Has an Ancient Biblical Status for Non-Jews Reemerged After 2500 Years?”

A Jewish Response to “The Dilemma of the Ger“

The Most Interesting Thing I Have Learned This Month

The Purpose of the Holy Spirit

Resurrection of the Leprous Prodigal

The Shemitah and The Yovel:  Examining The Relevance of God’s Appointed Times

Part I:  Counting the Days

The State of Israel and Ephraim’s Awakening: An Academic Investigation by Stephen Hindes

The Way:  A Documentary

There’s Still Room at the Summit!

Today I Am A Hebrew:  An Address to the B’ney Yosef North America Summit

Want to know what happened at the B’ney Yosef North America Summit?

What I Saw in Auschwitz

What is Torah Anyway?

When a Nation is Born in a Day

When Brothers Don’t Get Along

When History and Prophecy Come Together

Why Did Tolkien Care About the Jews? | PJ Media

Who Wins When Siblings Fight?

Will I ever be enough for you, Israel?

One thought on “B’ney Yisrael (Children of Israel)”