Resurrection of the Leprous Prodigal

Those who have leprosy might as well be dead.  Never mind that the disease we call leprosy today may or may not be one of the skin diseases meant by the Hebrew word tzara’at (צָרַעַת).  The fact is, whoever had it was cut off from the community:

Think about that for a moment.  Lepers could not go home.  They could not have any kind of normal relationship with their family members, friends, business associates, or anyone else with whom they interacted before the cursed condition fell upon them.  It did not matter what station of life the leper occupied; whether peasant or king, the disease cut them off from the life of the nation.  Even mighty King Uzziah of Judah learned that.  Although he reigned for 52 years in Jerusalem, the leprosy he contracted in the midst of his reign meant that he was king in name only:

King Uzziah was a leper until the day of his death.  He dwelt in an isolated house, because he was a leper; for he was cut off from the house of the Lord.  Then Jotham his son was over the king’s house, judging the people of the land.  (II Chronicles 26:21 NKJV)

How can a person shepherd the people of God when he is cut off from the House of God?  Is there any hope for him, or for the people he is anointed to lead?

Yes, there is hope.  That is why the Torah portion Metzora (The Leper; Leviticus 14:1-15:33) provides elaborate detail on the procedures for cleansing lepers.  Once healed, the priests help them through this process to restore them to their place in society.  In a certain sense, this is a resurrection from a type of death, and thus it is a symbol of what Messiah will do.

END_OF_DOCUMENT_TOKEN_TO_BE_REPLACED

Concept art for an upcoming film adaptation of Karel Čapek’s War with the Newts. (Photo: “The Fish People Attack!” on twitchfilm.com, via Topzine.cz; © 2014 Salamander syndicate)

Isaac Asimov could have written I, Robot without Karel Čapek’s help, but he would have needed a different word for the artificial life forms featured in his writing.  Asimov’s robot stories shifted the paradigms of science fiction by exploring the unintended consequences of creating something smarter and stronger than a human, but without a human’s ethical configuration.  For over half a century he probed dark and difficult territory, asking questions and spinning scenarios that remain disturbingly applicable to our present reality.  Yet Asimov neither invented the word “robot”, nor initiated the inquiry into the potential nemesis of unbridled technological innovation.

Bad things happen when man plays the role of God, as Mary Shelley demonstrated in 1818 with her first novel, Frankenstein; or, the Modern Prometheus.  Shelley brought the question into the modern era, but it was Karel Čapek who mechanized it.  Čapek’s play R.U.R. (Rossumovi univerzální roboti; Rossum’s Universal Robots) was a success from its first performance in 1920.  The play introduced international audiences to the Czech word robota, meaning hard work, a word rendered into English as robot.  The play is not a comedy; in Čapek’s imaginary world the robots are manufactured life forms designed to assist humans, but eventually they rebel and extinguish all human life.

Čapek revived this scenario in War with the Newts, a novel published in 1936 as satire on the hypocritically self-serving international system which enabled Nazi Germany’s dismemberment of Czechoslovakia two years later.  It is a humorously dark tale about a race of sentient amphibian creatures discovered in the waters of Indonesia.  The newts prove to be swift learners and adept at a multitude of tasks, making them ideal candidates for exploitation not only as workers, but also as undersea warriors.  In time the newts, like the robots, rebel, destroying the dry land and turning it into shallow waters suitable for their environmental needs.  The nations of the earth find themselves in a war for survival against a global amphibian army.  It is a war humanity will not win, but Čapek reveals that the victorious newts will turn on themselves and become the instruments of their own destruction, leaving a remnant of mankind to rebuild the planet.

It is frightful to contemplate the end of one’s world, particularly when the end is justly deserved.  Asimov, Shelley, and Čapek relate scenarios of judgment resulting from mankind’s own selfish shortsightedness – playing God, if you will.  The element of terror they invoke lurks in the revelation that the instruments of judgment are the works of our own hands.  As usual, art imitates life.  YHVH renders judgment on those who disregard His standard of righteousness and set up standards of their own – playing God, if you will.  Judgment brings a sentence of destruction and death, which is terrifying enough.  What makes it more chilling is to learn the name of the one who will bring about the anticipated death and destruction.  About 35 centuries ago, the doomed Canaanite civilization experienced that very thing shortly after Moses spoke these words:

END_OF_DOCUMENT_TOKEN_TO_BE_REPLACED

The Purpose of the Holy Spirit

A French farmer sows wheat in his field in the aftermath of World War I, bringing new life where there was death. This timeless action has instructed us for millennia about the work of God in bringing life to and through the kingdom of Israel which He sowed into the world. (Photo reproduced from Forward-March! The Photographic Record of America in the World War and the Post War Social Upheaval, Disabled American Veterans of the World War, Chicago, 1934)

Not that long ago, the men’s Bible study I am blessed to attend spent several months going through the Gospel of Mark.  One morning we looked in depth at the Parable of the Sower (Mark 4:1-25).  Our leader astutely pointed out the words of Yeshua:  “Do you not understand this parable?  How will you understand all the parables?” (Mark 4:13 NASB)  His conclusion, with which I agree, is that this parable is the key to understanding all of Yeshua’s parables, and thus everything He taught.  Yet for all our analysis of this parable over the centuries, it seems that we may have missed something very important.  What we have been missing dawned on me as we discussed Mark 4 on that day, and as we parted company I asked, “What if this parable is about the restoration of the entire Kingdom of Israel?”

We were not able to investigate that question at that time, but I have pondered it ever since.  The applicability of the Parable of the Sower to the Lost Tribes of Israel comes into focus when we consider the prophecy of Hosea.  We learn in Hosea’s first chapter that he speaks to the House of Israel, the Northern Kingdom which became the Lost Tribes.  Because of their unfaithfulness to YHVH, He judged them by removing them from His Presence and scattering them into the nations.  Yet He promised to bring them back to the Land as His people once again, as He said through Hosea:

Ephraim [Israel] is a trained heifer that loves to thresh, but I will come over her fair neck with a yoke; I will harness Ephraim, Judah will plow, Jacob will harrow for himself.  Sow with a view to righteousness, reap in accordance with kindness; break up your fallow ground, for it is time to seek the Lord until He comes to rain righteousness on you.  (Hosea 10:11-12 NASB)

There is much to investigate regarding this connection of the restoration of Israel with the Parable of the Sower.  My friend Ken Rank of United2Restore has made a good start by looking at the role of the Holy Spirit in this process.  His article is reproduced here from a recent post on Facebook.

END_OF_DOCUMENT_TOKEN_TO_BE_REPLACED

Is Jesus on Vacation? 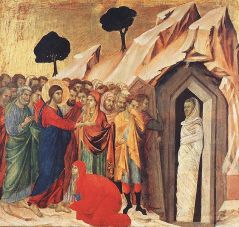 At some point in the time before His arrest and crucifixion, Yeshua (Jesus) the Messiah apparently took a break from the cares and troubles of Jerusalem.  He had good reason for this:  the High Priest and other leaders of the Jews were taking active measures to kill Him.

We know from the testimony of Scripture that Yeshua, as God in the flesh, came to exchange His life and redeem the world from the curse of sin and death (John 1:1-14; 3:10-21).  Since He was following a pre-arranged order and could not lay down His life until the right time (John 7:6-8), He seems to have taken a break until the fullness of time.  This “break” happened just after the astounding resurrection of Yeshua’s friend Lazarus.  The Apostle John tells us what happened next: END_OF_DOCUMENT_TOKEN_TO_BE_REPLACED

Iran’s government has been heading down a troubled path for many years. In this third post, I consider what we may expect spiritually in Iran in the coming months. The Iranian government is between a rock and a hard place. It has too many multifaceted problems and is fighting too many unwinnable wars. Besides their … END_OF_DOCUMENT_TOKEN_TO_BE_REPLACED