Fox Byte #6 ended with this question:  why are we still here?  If God said He would destroy all of humanity because we couldn’t be reformed, why didn’t He? Actually, God did destroy all of humanity.  That’s what Noah’s flood was all about.  But if we stop with God destroying everyone and everything, we only get half the story.  And this is where we hit a brick wall:  according to the rules God set up for His creation, He has no choice but to eliminate every form of rebellion (which is what we usually call “sin” or “wickedness”).  However, if He does that, then Satan, the ultimate rebel, wins.  It was Satan’s idea to bring sin into the world, thinking that if the world was corrupted God would abandon it.  But God can’t let Satan have control of the earth because then He would allow rebellion to continue and grow.  Satan already took one third of all the angels with him when he rebelled (see Revelation 12:3-9), so if he wins the earth there’s no telling where his rebellion will end! END_OF_DOCUMENT_TOKEN_TO_BE_REPLACED 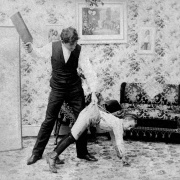 Let’s see what we have so far:

END_OF_DOCUMENT_TOKEN_TO_BE_REPLACED

Fox Byte #4 examined how our ancestors in the Garden of Eden chose to educate themselves on the knowledge of good and evil rather than get that knowledge in the way God intended.  How big of a problem was it that Adam and Eve decided to cut short God’s training program and grab the “godlike” status of knowing good and evil?  Even if they were not quite ready to handle all the truth at the moment they acquired it, would they have grown into it eventually?

Here’s the problem:  knowing the difference between good and evil is not just an intellectual exercise.  Once you have that knowledge, you are responsible for it.  That means not only that you must recognize what is good and what is evil, but you also must make a judgment on which to choose. END_OF_DOCUMENT_TOKEN_TO_BE_REPLACED

Continuing from Fox Byte #3, what did our ancestors gain from eating fruit that made them super smart?

If Adam and Eve were made “in the image of God” (Genesis 1:27), then God made them super smart in the first place.  After all, God made them to be in charge of the whole earth and keep it in order.  They would have to be really smart to do that.  But if they were so smart, what was the point of that tree in the garden? END_OF_DOCUMENT_TOKEN_TO_BE_REPLACED